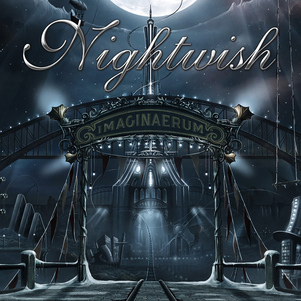 Taikatalvi
“Since we’re doing the movie thing, every song on this album is composed to a certain story, so that’s how it all sounded. The movie needed an intro of winter landscapes and all that, and I wanted to give it an exotic touch of being in Finnish!”

Storytime
“That’s the first single, and it’s all about the [1982] animated classic ‘The Snowman’. It’s such cool stuff, and I think that ‘Walking In The Air’ is the best piece of music ever composed, so [I thought], ‘let’s do a remake of that’! It can be seen in the movie as well – not quite as I imagine it, but in a different way. Will we film a new video for the single? We will film something separate, but also [use] some exerts from the film.”

Ghost River
“Since this is a dramatic album about the celebration of life and existence, you need the dark side as well. I love the dark side and I love all kinds of evil stuff, so we needed a few songs to describe those. ‘Ghost River’ and ‘Rest Calm’ are the two songs that are talking about the dark side of life. It’s very Van Halen-ish!”

Slow, Love, Slow
“You want to challenge yourself to do something that you have absolutely no idea about, and none of us know anything about jazz! Our drummer even had to take some lessons to learn how to use the brush! It all started when I started watching ‘Twin Peaks’ again. I just loved the soundtrack and thought, ‘Could we do something like that?’, and this is the result.”

Scaretale
“This is our version of ‘Enter Sandman’. When it comes to the lyrics, it’s all about childhood nightmares.”

Arabesque
“‘Arabesque’ is a catharsis to ‘Scaretale’, and it’s one of the scenes that the movie desperately needed, so that’s why it’s there.”

Turn Loose The Mermaids
“One thing that I like to do is pay a little homage to certain things that I really respect – for example, the My Dying Bride album ‘Turn Loose The Swans’ is one of my all-time favourites, which is why this is called ‘Turn Loose The Mermaids’. It’s nothing to do with My Dying Bride other than the title, but it was born in the moment when I saw my grandfather die, and my grandmother was giving him the final message. It was one of the most emotional experiences of my life – it was so dark and beautiful at the same time. I had to make a song about it – the last thing she did was check his teeth, warm his toes, and then [say] ‘Good journey my love, see you soon’. She was 93 back then, and 15 minutes after, he died. I’d never seen a dead person before, and it was an emotional moment, so I wanted to do a song about it. The album’s all about life and the power and beauty of imagination, and I thought that we needed to include the final chapter of life, which is death. When you see the movie, you can understand why it’s there.”

Rest Calm
“It reminds me of Paradise Lost and My Dying Bride a little bit. Again, it’s one of those crucial scenes in the movie that needed a song like this.”

The Crow, The Owl And The Dove
“I have to admit it’s a bit of a rip-off, because I’m a big fan of Henry David Thoreau, the poet from the 19th Century. I read his book ‘Walden’, where he said, ‘I don’t care about the love, the beauty, the pride or anything, just give me the truth. I thought there was a big philosophy behind that, and I started to think I could make a song about it. The crowd represents pride, the owl wisdom and the dove love and peace.”

Last Ride Of The Day
“I’m a fanatic when it comes to theme parks and roller-coasters. I’ve been to Disney World eight times now! Hollywood, Universal Studios, all this kinda stuff – it’s so, so, so good and you feel like a kid again. Also, it’s the perfect metaphor for life.”

Song Of Myself
“‘Song Of Myself’ is a book from Walt Witman, another one of my heroes. I wanted to pay homage to him and do the lyrics in a way that he would possibly write. It’s a real, open, thorough, personal catharsis – especially the spoken-word part. I don’t think it’s even going to be in the film because it’s so weird.”

Imaginaerum
“This is a medley for the end credits of the movie!”